OFF WITH HER CAKE!! 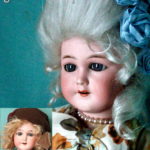 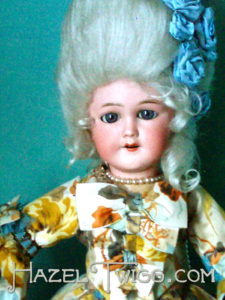 “What should I do next??” I asked my sister The Mayor.

“Ooh, I know! I’ve been watching ‘Outlander,’ and there’s this really pretty dress…”

Then my eyes lit onto the remaining silvery fun fur I had left over from my last O.L.D., America. I knew JUST want to do….

Thus begins the description for O.L.D. No. 85, our very own Marie Antoinette. You can see her adoption page HERE.

I really, really wanted to make a cake for her as an accessory. I looked up how-to’s on Pinterest and everything. But things came down to the wire. I decided that “cake time” would be better spent on a second outfit of “street clothes” for her to wear, and a hat stand for her wig. 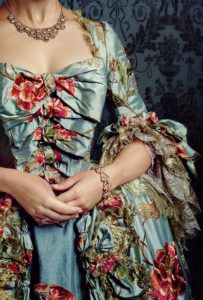 The “Outlander” orginal. Pretty hard to compete with that… 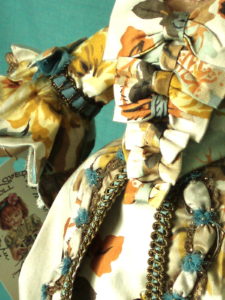 …I did my very best.

There would have been plenty of time for everything were this outfit not so labor intensive. I call this costume the “Bow” dress because of the series of bows that go down the front of the bodice.

My dear friend Janey had sent me some metallic trims from an old lamp factory. I spray painted different laces for the rest. 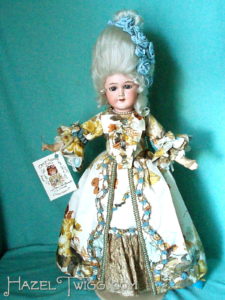 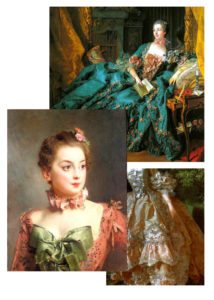 Here are some of the inspirations for the Outlander dress. And the beat goes on…

The swatch upholstery fabric I had on hand had the palest of slate blues in its pattern; I wanted to emphasis that. So I found some Wedgwood blue organdy and made a bunch of tiny little flowers, then beaded them with tiny gold glass beads. 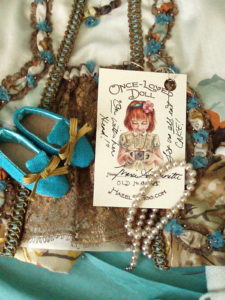 One of the trims originally came with peach velvet ribbon. I exchanged it for blue to trim the sleeves, and wove blue silk ribbon for the trim for Marie’s skirt. And then all the trims had to be sewn on by hand. Not to mention the tiny slippers that most likely won’t be seen. But we can’t have our queen go barefoot! 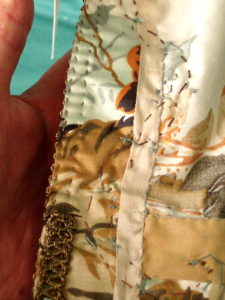 It’s kind of hard to see, but there are hundreds and hundreds of hand stitches on this dress. That is NOT an exaggeration.

What a difference a wig makes! Here is Marie in the blonde mohair wig she arrived in, along with her “street wear” dress for when she’s not in the mood to prance around in her wig.

Speaking of her “powdered” wig, thank you Julie for giving me the fun fur! It was indeed fun.

Marie in her blonde mohair wig and street clothes.

So there you have it! Our Marie Antoinette in her “Bow” dress! And now I am off to my sewing room to pick my next victim… 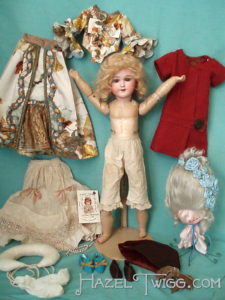 Our previous “powdered wig drummer, America, was adopted by Kathleen Z. of Alameda, California! She also happens to have adopted Liberty, who was also a drummer. I daresay she must have a very noisy – and happy –  household. Thank you, Kathleen!

Until then, happy last days of February! You are very much my favorite.

Posted in Lost Dolls | Comments Off on OFF WITH HER CAKE!!
Tags: Marie Antoinette, Outlander 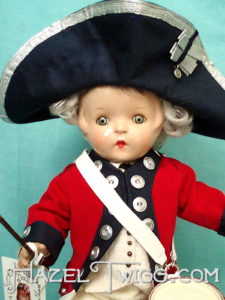 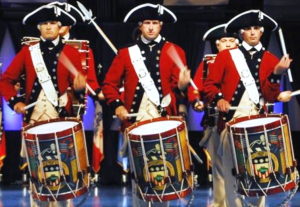 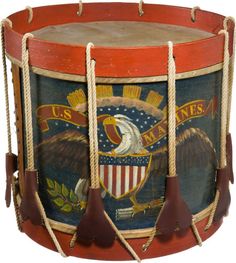 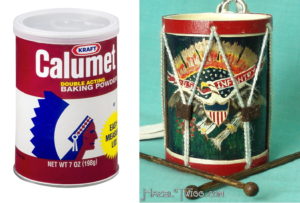 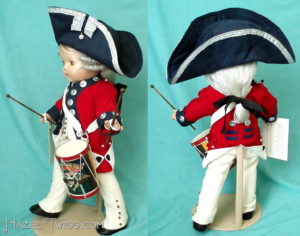 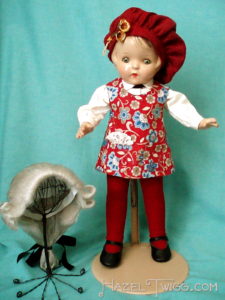