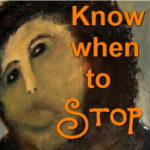 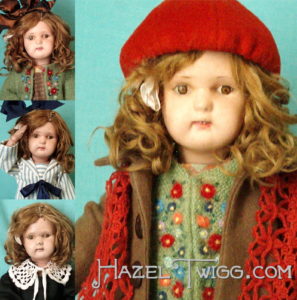 Susanna’s current page with her new nose. My mother gave me a new camera that I hid for safekeeping. I have GOT to find it. These photos are awful, but you get the idea.

O.L.D. (Once-Loved Doll) No. 83 is named Susanna. You can see her adoption page HERE.

To touch up, or not to touch up? That is hardly ever the question, especially when it comes to composition dolls. Of course I’m going to do something!

Schoenhuts, however, are an entirely different animal. Older, rarer, and more expensive, Schoenhut dolls attract a whole different breed of those who love them and are drawn to them.

I had one last Schoenhut, and this girl was more worn than the previous two I’d had in the past. Namely, the paint on her nose was gone, showing the wood beneath. I had joined a Schoenhut group on Facebook when I’d received my first doll of that type so that I could learn more about them. Who better to ask what should be done to this girl than those who adopt them in droves? 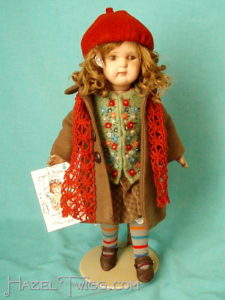 The consensus was that I should leave her alone. Some even sweetly provided photos of Schoenhuts with far worse wear. I secretly breathed a sigh of relief. Good! Because that would give me more time to focus on the clothes, which is my favorite thing to do.

So I got to work. I cut up an old mohair sweater of mine and sewed it into a doll-size sweater, embroidering it with flowers in vintage wool yarn. I made a coat and a hat and two dresses. Sewed little leather shoes with glass buttons, and two pairs of socks. After days of toil, she was ready. I took my pictures in dubious light, and finally put her up for adoption.

An hour into her offering, my phone rang.

“Whyever would I get mad?” I said in my musical lilt, recognizing my sister The Mayor on the other end of the line.

“That NOSE. You have GOT to do something about THAT NOSE!” I could practically see her jumping up and down and waving her tiny fists as she spoke. 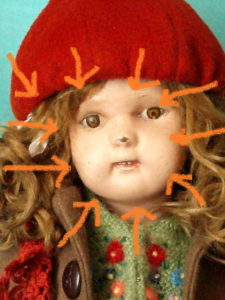 Susanna’s sailor dress is made from bonafide old ticking. I had to work around the worn spots.

No! My mind rebelled. The pictures are done! She already has a bid! And watchers! And she’s only just begun!

Still, my sister had given me a niggle of doubt. But she doesn’t even like dolls! I shouted back at that niggle. Hmmm…Better to ask for a third opinion from someone who actually does like dolls. I called my friend Brenda. She looked at Susanna’s link.

“I think your sister is right.” 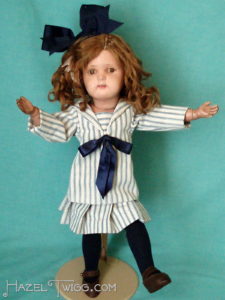 I huffily took down Susanna’s adoption page, and got back to work. It wasn’t all bad. It gave me a chance to do other things I’d wanted to do but ran out of time for. I added a reversible belt to her brown dress, and turned the vintage half slip I’d found for her into a full slip, complete with tea-dye and a ribbon accent. When she was completed, I took a second round of pictures, not quite as good this time, but at least her nose and the rest of her face was DONE.

It’s a tricky thing, this touch up of these old dolls. Their skin is not all one color. There’s patina! I actually had to layer several different colors to make her nose repair unnoticeable, and I was as subtle with the rest of her features as I could be. I didn’t want to make her look like new, and I didn’t want to idealize her features. I wanted her new mother not to know that anything had been done – if she hadn’t been told first.

And THAT is the story of NOSEGATE. 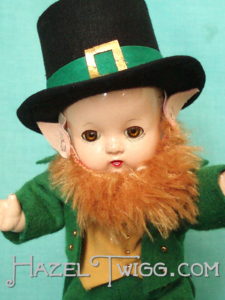 Our darling Jefferson was adopted by…Cecilia S. of Foster, Ohio. Another new person! Thank you, Cecilia! And yes, that song was on my mind all morning as I packed little Jefferson for his trip. I HOPE you know which song I mean. Surely, it can’t be THAT old…

And with that, I leave you! Hunker down, Iowa! The ice storm’s a-coming! You’re my favorite.

P.S. If anyone gets the title image joke with the “Know when to Stop” written in it, I shall be tickled pink. Go, Packers!