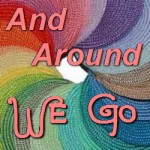 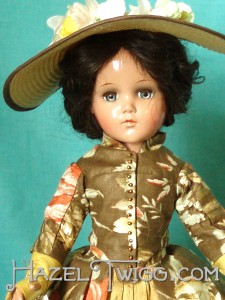 The resemblance was uncanny.

It’s not often you see a composition doll – that’s not a Snow White, that is – with black hair. Granted, it was not this girl’s original wig, but still. She had just arrived and was in fairly good shape, upon first inspection. With that thick black wig surrounding her delicate features, for the briefest of moments I thought one of my girl’s had come back to me. She was the spitting image of O.L.D. No. 43. 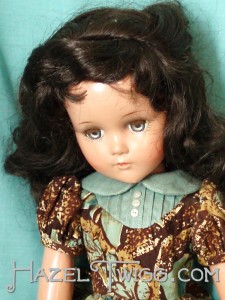 Here’s her “before” picture. Hardly different, but her wig wasn’t quite right.

Then she told me her name, and things got uncannier still.

“Claire,” she said, in her soft sweet voice. 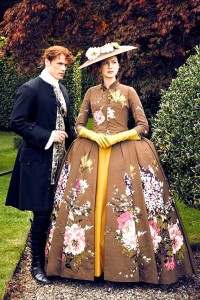 How fortuitous! Because weeks before, The Mayor of the tiny town in which I live sent me the image of a dress via email. It was from the second season of the STARZ series, “Outlander.” The mayor knew I had already done an Outlander doll. She was number 43, done almost a year ago when another pretty girl named Claire knocked on my door. When I saw second season dress, I felt a pang. If only, if only…ah, well! 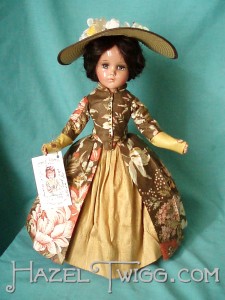 I had a scant half yard to work with and even had to put some panels of similar fabric within the folds of the skirt to have any kind of fullness. “Why don’t you pick another fabric instead?” the Mayor squeaked. She knew my response before the words were even out of her mouth: NO.

Now, standing right here before me, was my chance…

Thus begins the description for Claire II. You can see her adoption page HERE.

At 18″, she’s a few inches smaller than the previous Claire. 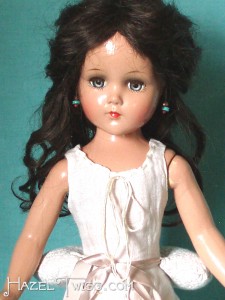 After I took the first pictures, I touched up her lips and added “earrings” (they’re hanging from her human hair wiglet) for a splash of color.

I’m not quite sure who gave me this nice, large print. “Too large for a doll, probably,” I thought. But you never know, so I tucked it away. And then came the Outlander season two dress. PERFECT.

I’m not a fan of the new straw hats made for dolls. They’re thickly and slopily woven and just don’t look right. So here’s my solution, and it’s totally doable by anyone! All you need is something you can find at thrift stores and garage sales everywhere, a can of tuna, hot water, and nerves of steel. 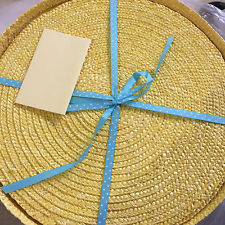 Here’s what I did: you know those round woven place mats? They come in all kinds of colors. Why, the other day I found one in green for .50! This was my first attempt at using one for a hat, but I thought it was worth a shot, as I like the tighter weave. 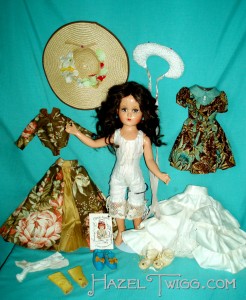 I took the place mat, ran some hot tap water over it, worked it over a tuna can, because that was about the right size for the crown of the hat (you would of course find whatever can or container would be right for your little girl), put some fat rubber bands around the hat and the can to hold the shape, and let it dry. If I had it to do again, I might have tried maybe boiling or almost boiling the water, but I only had one place mat in this shade, and therefore only one chance. 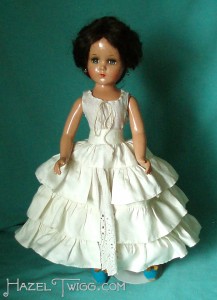 Yep, it was a dark and stormy day…

Here’s where the nerves of steel come in (and I’m just kidding about that). After cutting in increments – you can always cut more, but you can’t cut less! – until I got the hat brim size I wanted, I sewed bias tape aaaallll the way around the edge of the brim. My thread broke twice and then my bobbin ran out of thread, causing a few swearwords, I confess, but I hit both sides of the trim on the whole thing! I’m kinda proud of that…

Abigail, the 4th Sewickley FOUR All Seasons, was adopted by Hillary P. of New York! That makes three for our girl Hillary. Start spreading the news! A heartfelt thank you to all who bid.

And with that, I leave you! Happy rainy (a clue!) April, you’re my favorite! 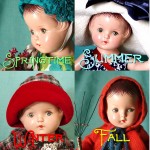 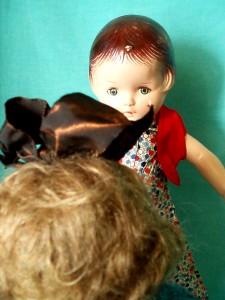 “Dot! It’s not polite to stare,” I whispered as softly as I could, while still trying to reach Dot’s very distracted ears.

“Naturally, I’ve seen you around,” I said louder to the next O.L.D. (Once-Loved Doll), “seeing as how you’re from the Sewickley clan, but what exactly is your name?”

The little Sewickley girl seemed as entranced with Dot as Dot was with her.

“Abigail,” she murmured back. 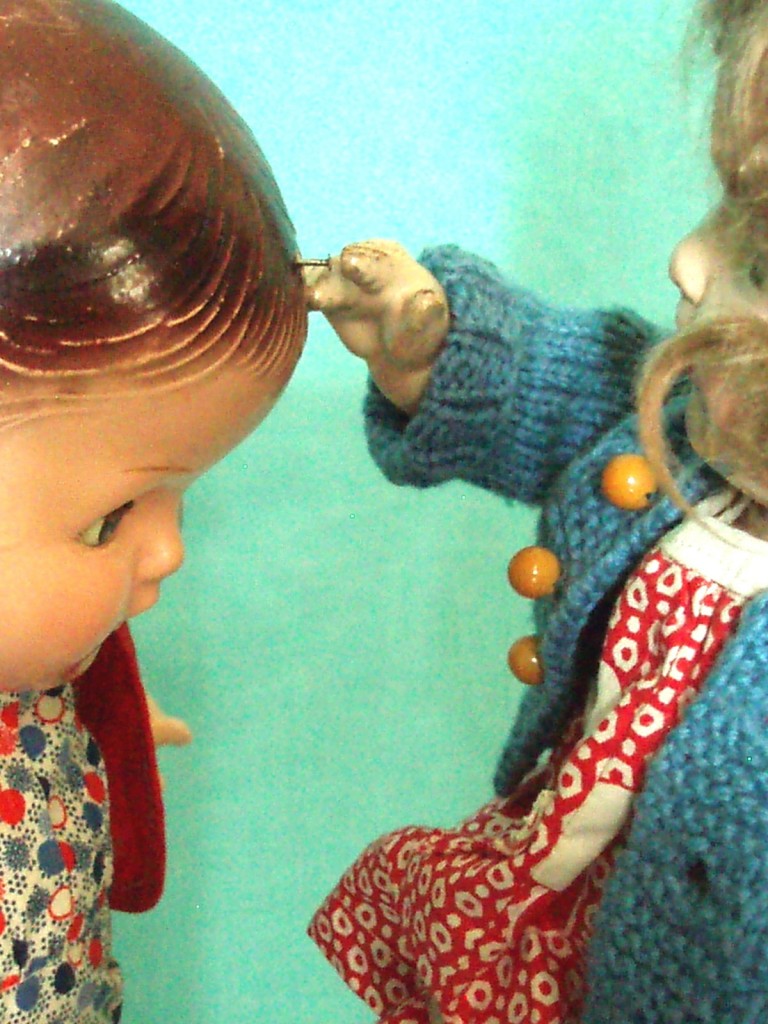 The constant staring between the two was beginning to draw attention. All the other dolls currently waiting their turn at the Hideaway slowly began to gather around the pair.

A kitten caused the broken pinky. For some reason, she doesn’t remember how she got the nail in her forehead…

“Oh! Um…Abby for short, then?” I asked, trying to make conversation. I don’t like any of my girls, whether they’re missing limbs or hair or anything else, to feel awkward.

“No, just plain Abigail….” she trailed off. Suddenly she gasped. With her eyes still trained on Dot, her hands flew up to her forehead. She started laughing. “So that’s what you’re looking at! I’d forgotten I still had it!”

Abigail leaned down so that Dot could touch the nail – the nail! – sticking out of her forehead.

Dot has seen it all, I can tell you that much. But I don’t think she’ll ever forget the fourth doll in the Sewickley Series… 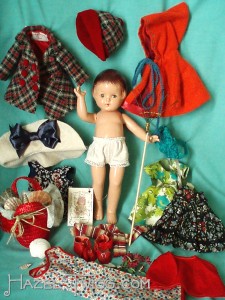 Thus begins the description for Abigail. You can see her adoption page HERE. Besides being No. 69, she is the FOURTH in the “Sewickley Series.”

You know what else there are four of, ‘specially here in Iowa? SEASONS! And thus the “Sewickley FOUR All Seasons” theme was born. See what I did there? With “foUr” instead of “for”? GENIUS!

Ooh, look! He actually IS handsome!

While I was working on Abigail’s clothing, one song in particular ran through my mind. While he’s a teensy bit before my time, to me the definition of “Handsome Man Singing” is Robert Goulet. Even if I never saw him before! When he sings, he just sounds handsome.

Know which song of his I was thinking of when I was working on Abigail? Oh sure, it’s in the title, but I’ll say it again here: If Ever I Would Leave You from Camelot and quite possibly the most romantic songs ever sung. It’s about undying love through all four seasons, and it’s sung by a very handsome sounding and looking man. What could be better?

If ever I would leave you, it wouldn’t be in summer
Seeing you in summer, I never would go
Your hair streaked with sunlight, your lips red as flame
Your face with a luster that puts gold to shame

But if I’d ever leave you, how could it be in autumn
How I’d leave in autumn, I never will know
I’ve seen how you sparkle when fall nips the air
I know you in autumn and I must be there

And could I leave you running merrily through the snow
Or on a wintry evening when you catch the fire’s glow?

If ever I would leave you, how could it be in springtime?
Knowing how in spring I’m bewitched by you so
Oh, no, not in springtime, summer, winter, or fall
No, never could I leave you at all

Har. Just kidding. Not quite yet…

First! Sweet Patsyette, dressed for half the holidays went to our generous friend  Janey J. from Oakland, California! Thank you Janey!

And with that, now I leave you! But not forever…because you’re my favorite, no matter the season.

Posted in Lost Dolls | 2 Comments »
Tags: Camelot, If Ever I Would Leave You, Robert Goulet